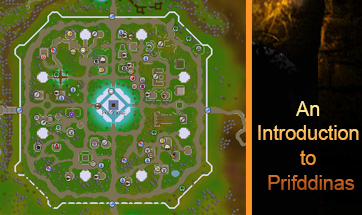 Prifddinas was a closed-off city in the western part of the world map, and with the release of Song of the Elves, we are now able to enter. It is somewhat based on the model of RS3, but with fewer activities and more of a minimal approach that fits in Oldschool Runescape.

It was created in the First Age, making it the oldest continuous cities in this version of Runescape. It was constructed by eight different clans when elves arrived on the planet, and the city is still divided into having a district for each clan.

You will find the city, although quite large, is mostly made of basic amenities found in other capital cities in the game. The tower of voices acts as the neutral, center of the city.

The Hefin district is in the northeastern part is a spiritual center. Notable features include a fully-operational bank, the new agility course, an altar, a mace shop, a sandpit, and the only pub that sells Elven dawn (which boosts agility).

Amlodd district This district has a magic theme as this clan is made up of mystics. You will find an abundance of magic trees around and it’s one of the closest ones to a bank. There is also the Gauntlet (the new solo dungeon), a magic shop, and a staff shop.

This district is where players may craft crystal equipment using singing bowls. This clan has a crafting theme and you will find a crafting shop, dye shop, clothing shop, a spinning wheel, and a lume.

This district also contains the new POH portal, which can be unlocked for 50,000 coins.

This district is indeed involved with the Iorwerth Clan that’s found in the questline. This is still a friendly area where the player can utilize its facilities.

The slayer dungeon (Iorwerth’s Dungeon) has Waterfiends, Moss Giants, Nechryaels, Bloodvelds, Dark Beasts, and Kurasks. Players may receive crystal shards and there is a possibility of having a Konar slayer assignment here. Since cannons are permitted, it adds a new dynamic for slayer tasks.

Other features of the district include an armor shop, a weapon shop and a fighting arena. This arena cannot be entered by players but perhaps there are plans in the future for this area.

Trahaearn is the mining and smithing district in the southeastern part. You will find the closest anvil and furnace to the bank in the game, making it quite useful for ultimate ironmen as well. There is also a mining shop to buy pickaxes when needed.

The Trahaearn mine is also found here, which feature multiple rune rocks, coal, iron, silver, gold, mithril, and adamantite. There is also soft clay rocks that produce clay that’s already softened, although it may have limited use for high-level players.

The teleport platform in this area leads to Zalcano, the new skilling boss. Fitting the theme of this clan, the boss is based around mining and smithing.

The Cadarn clan is in the southeastern part and are the warriors of the eleven people. There is a woodland theme with plenty of Yew trees close to the bank.

The part of the city features a full bank, a general store, an archery store, and several elves that may be pickpocketed.

This district is the farming area, comparable to Hosidius to an extent. There are teak and mahogany trees nearby a sawmill, making it one of the more efficient ways to get planks for ironmen.

There are flower patches, allotment patches, a Crystal Tree patch, and an accompanying farming shop. The crystal tree patch yields crystal shards to be used for singing.

This district is comparable to seers village and has lots of herblore-related content. You can buy basic herblore supplies, food supplies and there are multiple vendor stalls are similar to those found in Ardougne.

The Tower of Voices

As mentioned in the intro, this tower serves as the cultural heart of the city and is where Seren’s fragment is stored. This tower plays a role in the quest, in which it is recovered from the corrupted Iorwerth Clan. Players may pay Crefydd to set their respawn point to Prifddinas and he’s located on the second floor of the tower.

Another point of interest is the Elven Crystal Chest, which is used with a regular crystal key enhanced with crystal shards. Rewards are almost identical to the crystal chest, but with the chance to get the new  Dragonstone armor set.

Another unique aspect of Prifddinas is that it has an exclusive impling, the Crystal Impling. It requires a hunter level of 80 to catch and does not wander outside the walls of the city.

As it is the third highest impling in the game, expect the rewards to be in between Ninja and Dragon implings. The only thing players want from this impling is the Elven signet, which slightly boosts the longevity of crystal equipment. The rest of the rewards are well under 100,000 coins in value.

The teleport crystal can be kind of a nag since it needs to be recharged. The update has brought in the rare Eternal Teleport Crystal, being made from the enhanced crystal teleport seed, currently worth over 600,000 coins. The conversion with a singing bowl required 80 crafting and smithing so it isn’t something that is simply purchased.

The enhanced crystal teleport seed is a very rare drop from pickpocketing elves around the city or killing guards. Thieving with the Rogue outfit does increase the chance of getting one.

While Prifddinas does offer new stuff, nothing is particularly necessary to the game and most players will probably be found at Zalcano. Although this does contain the best lace to smith bars, use anvils or crate self-cut planks, there were already more efficient methods in the game. It remains to be seen if more updates will come to the city, or if The Gauntlet or Zalcano will receive nerfs or buffs. By the way, buy safe OSRS Gold and RuneScape 3 Gold from WinRSGold.com so quickly. Enjoy Here.