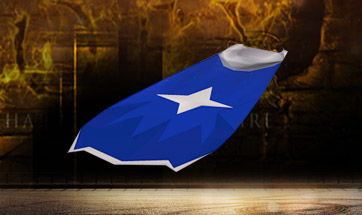 Years after the original release of Mage Arena, Jagex decided to release a much tougher spin on this mini-quest with the coveted Imbued Cape as a reward. The three bosses you will have to fight are extremely dangerous, making it quite hard for 1 defense pures. You will also have to venture into high levels of the wilderness so even more likely to die to a high leveler player killer.

Before considering taking on this challenge, at least have:

• All 3 spells trained at the Mage Arena

• Weapon: Staff of Light (for Saradomin Strike), Toxic Staff of the Damned (for Flames of Zamorak), and Guthix Staff for Claws of Guthix

After starting the mini quest, you will be given an enchanted symbol that is just like the treasure trail hot/cold system to find the demons. Each time you touch the symbol, you will take significant damage and there is no way to avoid eating food.

The safest way to navigate, especially on a weak account, is to run around naked with the symbol and food in order to scout where the next demon spawns. Once you find the location, you may go bank to re-gear and fight them on a full inventory of supplies.

You are not allowed to bank demon hearts but instead must be stored by talking to Kolodion. The best way to go about is to pretend that you are a 1-itemer on the way back to mage bank, reducing the chance that other players will attack you. After the heart is stored, navigate to the next boss and repeat.

Each demon representing each god has somewhat the same mechanics so this section can be consolidated. You may only cast each respective god spell for each follower and they will cast back with the same spell, including the negative effects that go with them. Protect from prayer will only slightly reduce the damage and they will still hit hard frequently on your 1 Defence.

Your inventory should be loaded with Saradomin Brews, Super Restores and at least Shark or Karambwans to outlast each fight. Have one extra Ring of Recoil in your inventory as these are only free hits that will help burn down the boss before you run out of food. Save inventory space by bringing a 1-click teleport, although the demons can teleblock you.

Since your demons will spawn in random locations, each fight will be improvised. If you are lucky to have trees in the area, you may kite around to avoid hits. In most instances, you will just have to tank the hits and keep up with eating and casting. Having a high magic bonus in your gear will be a slight boost against them, so bring what you can.

Pking With the Imbued Cape

It should be noted that the Imbued Cape will be lost if you die in a PvP situation. If you die to a boss outside of the wilderness, it will be protected automatically. Ironically, this makes it more viable as a PvM item and provides the best magic offense in the game.

Bringing a high-level account along will make success even more likely, especially if you are using a low level or 1 prayer account build. The main ways you can get boosted is by him/her casting Vengeance on you, using Heal Other and acting as a mule to trade you additional food or potions when needed.

After all, you should at least have a friend or alternative accounts scouting ahead so you don’t get piled by groups of Pkers. Some of the spots where each boss spawns will be in multi-combat, so the chance of death is quite high if a clan is roaming about.

Doing Mage Arena 2 on a pure is entirely possible, albeit being much more dangerous so don’t be surprised if you have quite a few deaths. If you have never done it before, you should try to at least practice on your main account or go in on a few suicide missions to test out the boss mechanics. With a little persistence, you will too have your Imbued Cape in no time.