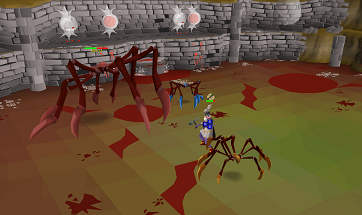 The Forthos Dungeon passed player polls with an overwhelming 90% favorable vote, so it was finally released at the beginning of July. It is located right under Hosidius, which is why it may also be referred to as the Hosidius Dungeon. Both players and developers have likened the dungeon to the Talverly Dungeon, albeit being at a much smaller scale.

Found within are both new and familiar creatures, including a minigame and farmable boss. The developers said themselves that this updated was intended for mid-level players, so don't be afraid if you are relatively new or under-geared.

In Search of Knowledge

This is a new mini-quest centered around the dungeon with the potential to get three experience lamps, giving 10,000 experience each in any skill that's at least Level 40. The tomes must be filled with pages dropped by monsters within the dungeon, being the tatter  Moon pages, tattered Sun pages, and tattered temple pages. Each book required four pages each to complete the mini-quest.

Red Dragons are yet another enemy in the dungeon that can drop tattered pages and Grubby Keys. The hidden value here is that this is probably the only convenient place to kill Red Dragons for Slayer tasks while utilizing their bones and hides at the same time.

Undead Druids can be a deadly annoyance due to their high magic bonus and max hit of 22. It is recommended to leave on protecting from prayer while running past them or engaging in combat, no matter the combat style you use.

While their loot table doesn't have any big-ticket items, they commonly drop large stacks of runes, coins, and herblore secondaries that add up quickly. They also have access to the Gem Drop Table and are a reliable source of tattered pages and Grubby Keys. The mask of Ranulnly is the only unique drop that they have but it has the same exact stats as a regular wizard's hat.

The key to the chest, the Grubby Key, is droppable by monsters within the dungeon, including low-level baby red dragons. Sarachnis has the highest chance of dropping a key, but Undead Druids are a reliable source for normal monsters.

While more data about what the Chest contains needs to be further explored, some known drops include:

Sarachnis is a new mid-level boss that came out with this update and features the Sarachnis cudgel as its featured drop. This weapon is slightly less powerful than the leaf-bladed battleaxe while being slightly faster, making it one of the better one-handed crush weapons in the game. Some have even referred to this weapon being the "budget Abyssal Bludgeon", considering that there are few competing crush weapons in the game.

The rest of her drop table isn't anything to get excited about. There is mostly stacks of runes, high-level seeds. Herbs, Dragon Bones and Dragon Hides. She also can drop a Giant Egg Sack that contains 100 red spider eggs inside, making it a decent source for Ironmen.

While the Sarachnis boss will be very underwhelming for players experienced in raids, it is quite a complex boss for mid-level players. The fight contains both melee and ranged attacks, so switching prayers between the two will help.

One unique aspect of this boss is her ability to heal herself with normal melee attacks, showing up at a purple hit splat on the player. She may also snare players in a sticky web for a few seconds, a less deadly mechanic also found in the Theatre of Blood. Players that are too slow to kill her may be overwhelmed by her constant spider spaws that deal both melee and ranged damage.

Attacking with a crush weapon is really the main viable way to kill her efficiently, so bring an Abyssal Bludgeon, leaf-bladed battleaxe or anything within your budget. Your special attack bar should be reserved for Dragon Warhammer specials to lower her defence, which would especially help if other party members use range or another attack style.

The boss is definitely farmable as she respawns 30-seconds after death and does not require events to trigger a new fight. Maxed players with plenty of defence, accuracy and raiding experience probably can consistently kill her with minimal bank and POH trips in between.

To get an idea of what's in store for farming this boss in the long term, check out the results in this video by Mika 279:

Sraracha (The pet, not the sauce)

Pet collectors will likely be all over this boss for the rare Sraracha pet. The name is a play on Sriracha hot sauce, which has a cult following on the internet.

The drop is very rare and considerably rarer than other items on the drop table like the Jar of Eyes or Sarachnis cudgel. Although, one lucky Reddit user got the pet after six kills on the first day.

Just like any other pet, there is a dialogue when you speak with it (with obvious Starcraft references):

Sraracha: The hive cluster is under attack!

You: Erm, I think the attack is over. I have already killed your queen.

Sraracha: Then we should spawn more overlords!

While there probably easy to overlook this dungeon if you are on to end-game content, this dungeon will be quite useful for Ironmen and low-level players. In particular, this is probably the best spot to do Red Dragon slayer tasks (aside from the Myths' Guild). Ironmen in dire need of Red Spider eggs will definitely be happy, whether they use the spawns on the ground or decide to farm the boss for Giant Egg Sacs. And if you want to know more about runescape guides & runescape gold, follow us! Thank you!