A Fairy Tale I – Growing Pains, allows you to dive into the Lost City in Zanaris, and explore the mysterious fairy world within OSRS gold. So, if you’re looking for a fun time, we’ve got a comprehensive guide to completing this quest!

For this experienced and long quest, you’ll need to have completed: Priest in Peril, The Restless Ghost, Nature Spirit, Lost City and Jungle Potion (if you’re an ironman). You’ll also need to be able to defeat a level 111 monster, using minimal equipment. For the item requirements, you’ll need to have secateurs, the Draynor skull, a spade, a ghost speak amulet, A dramen/lunar staff, and you’ll need to get some items that are assigned to you randomly, at a later stage. We also recommend you bring along teleports to Varrock, Falador, Lumbridge, as well as a druid pouch, and a teleport to the Nature Spirit, such as an ectophial.

To start, you’ll need to talk to Maritn the Master Garderner, who you can find around the pig pen, north-west of the bank in Draynor Village. We’ve attached a map if you still don’t know where to go. Talk to him, and he’ll assign you the quest.

Bring your secateurs, Falador, Lumbridge and Varrock teleports, and your dramen staff with you for this part. Talk to any gardener near a farming patch and ask them if they’re in the Group of Advanced Garderners. You’ll have to talk to 5 of them. We’ve got a map of the nearest 5 gardeners to talk to, just in case you’re lost. These gardeners are the ones closest to the quest start location, so you should ideally go to them. Once you finish talking to them, head back to Draynor Village, and speak to Martin. Then, get your Dramen Staff, and open the door on the unmarked house in the Lumbridge Swamp to get to Zanaris.

In Zanaris, head to the Fairy Queen throne room, which is south of the place which you entered. As you’ll see, the Fairy Queen is missing, and there is a Fairy Godfather there instead. Now, so you can find the queen, go west and head into the room north of the bank, where you’ll see Fairy Nuff. Talk to her, and she’ll give you a list to take to Zandar Horfyre.

For this part, you’ll need your symptoms list, a spade and Falador teleport, and a draynor skull, which you can find by digging the grave behind the Draynor Manor. With your items, head to Falador, and head west to the Dark Wizard’s Tower. Head to the top floor, where you’ll find Zandar, and talk to him.He’ll then redirect you to Malignius Mortifier. To find him, head south of Falador, and you’ll see him among some elemental wizards. Speak to him, and he’ll ask for the Draynor Skull. Hand it over, and you’re ready to proceed.

For this part, you’ll need your secateurs, a ghost speak amulet, a teleport to the Nature Spirit, and the 3 assigned items.

You’ll now need to kill Tanglefoot, the monster at the root of the queen’s problem. To do so, you’ll need blessed secateurs. And you’ll need 3 randomised items, which he specifies. The majority of the items are tradable, so you shouldn’t have an issue in getting them. With all your items, head to the Mort Myre Swamp, and talk to the Nature Spirit. He’ll bless the secateurs.


For this part, you need a dramen staff, the magic secateurs, food and armour. Keep in mind, if you die in this fight, you will lose all your items. So, don’t bring anything that you are not willing to lose. So, it’s time to kill Tanglefoot! 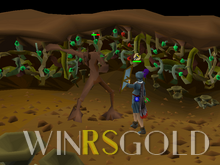 Head back to Zanaris with your items and equipment. Then, head south-west to the Cosmic Altar. The “Gatekeeper” should let you through one side the room, with a gap through the wall that you can climb through. In the tunnel, you’ll find the level 111 monster, Tanglefoot. Weild your magic secateurs and kill him. Protecting from melee is a good prayer to use in this fight, to reduce the damage received from Tanglefoot. If you’re a low level and worried about dying, use a ‘hit-and-run’ method to avoid taking damage, while dealing damage.

When Tanglefoot is defeated, you’ll get the Queen’s secateurs. Next, head to the Fairy Godfather, and congratulations – you have completed the quest!

The rewards for this quest are: 2 quest points, 3500 farming experience, 2000 attack experience, 1000 magic experience, and most importantly – the magic secateurs, which grant you an increased 10% crop harvest when farming. Also, you can go ahead and complete the next part of thius quest series: Fairy tale II – Cure a Queen.

That wraps up our guide, good luck, and we’ll see you in another guide!