Roving Elves, the sequel to the Waterfall Quest and Regicide, features the explorations around the tomb of King Baxtorian, on behalf of his grandson Islwyn.

For this master and short to medium quest, you’ll need to have completed the Waterfall Quest, Plague City, Biohazard, Underground Pass and Regicide. Furthermore, you’ll need 56 agility, which can be boosted. You should also be able to kill a level 84 Moss Guardian with limited equipment. For the items, you need to bring Glarial’s pebble, a Key, a Spade,OSRS gold, a Rope. Also, we recommend you bring an anti-poison, food, prayer potions, combat associated positions, a games necklace, Ardougne teleports, Camelot teleports, Iorwerth Camp Teleports, Coins and any axe with a tinderbox.

To start, you’ll need to talk to Islwyn in the Elven Woods. He can be scattered across a wide area though, so use the adjacent map to track his location and find him.

Talk to Islwyn, and he’ll direct you to Eluned. Then, when you speak to Eluned, he’ll tell you to retrieve the consecration seed from Glarial’s tomb. You’ll need to kill a level 84 moss guardian for this next part, so store away all your armour and weaponry, and withdraw your food and other simple necessities.

Now, if you have Glarial’s pebble, feel free to skip this part. If not, to get it, go to the Tree Gnome Village. Then, just outside the loose rail, head down the ladder to the east. Then head west and talk to Golrie for the pebble. 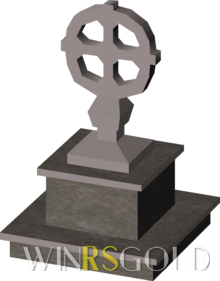 Take no armour, weapons, or runes with you, and don't carry in your inventory a clue scroll. All capes and gloves which offer bonuses, including Ardougne cloaks, are not allowed! The Graceful outfit, jewellery, including jewellery that gives stat bonuses (such as a fury amulet) are allowed, as are Fremennik rings. Teleport tablets can be carried in in case of emergency. You can take in the event RPG, a weapon that lets you hit at high speed. The robe top and bottom can be used too. The Rada’s Blessing & God blessings are also allowed. It won't work here to carry a dramen branch and a knife to shape a dramen staff.

You are going to have to kill one unarmed Moss Guardian; however, you are able to take food and potions with you. If you have them, it's suggested you use a super potion set. Lots of food is recommended as the guardian has a max hit of 14 which is fairly high. Prayer can be used here, and a recoil ring works. Bringing an event RPG is highly recommended, because it has no rewards and will grant you an attack rate of 3 ticks, allowing you to hit twice as quickly as the guardian. Using the Barbarian Assault minigame teleport, or games necklace to teleport to Barbarian Outpost, or Fishing Guild skills necklace. Look for a minimap grey-out field, directly left of the Kingdom of Kandarin. Use the pebble on the tombstone to get down. You're going to be one ladder down. If it says nothing is happening, you are carrying an object not allowed down there. Drop or bank the item, and return. 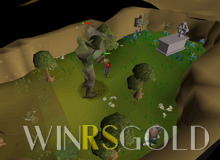 You will find two aggressive level 84 Moss Guardian in the crypt, one just west of where you climb down the ladder and one in a small room with a chest west of it. They use a slow but accurate combination of magic and melee attack, so they hit both in 1 hit and can reach up to 14. You have to kill one of them to get consecration seed. If you can't finish the first time, then you can go back to the bank and get some more food. The moss guardian you were fighting on returns should have the same amount of life it did when you left. Another tactic is to get the Moss Guardian trapped behind a pillar, reach it and then sprint behind the pillar. It takes a bit longer, and sometimes you take some damage, but you should be able to do it, with some food in your inventory. A third strategy is to wear a games necklace. Teleport to the Barbarian Outpost when you die, go down the falls and attack the Moss Guardian again. Repeat until the it dies.

Take back the seed to Eluned. The easiest way to get to her is by chartering a ship to Port Tyras. Since you'll need to pass dense forest, if you're not at level 56, don't forget agility boosts. You don't need 56 Agility to navigate the dense forest from Port Tyras. 56 Agility is needed only when entering the port through the dense forest. Eluned will enchant your consecration seed.

For this part take all the items and go to the Waterfall Dungeon. If you don't know how, follow the steps below: go to the Waterfall Quest starting location (the house northwest of the tomb where you've got the seed). Enter the house; then head out to the west for a raft. Take the raft to get down the river. It’s going to crash halfway. To get to the next island use your rope on the rock. Using your rope right next to you on the dead tree to get down to the entrance of the dungeon. 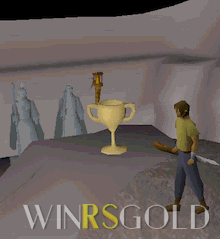 From here take the eastern room direction first. Go to the crates on the north. Check them to find a key. Return now to the main room, and then west. Go over to a locked door by the fire giants. To get through, use your key on it. Using the key to the north of next door, you'll now be inside the room where you've completed the Waterfall quest. Go to the chalice and then left click the seed while next door. You'll dig a hole, bury the seed and see a tiny tree growing in crystal. For it to work you need to have a spade in your inventory. Now just get out of the waterfall, either by walking or teleporting.