In the kingdom of Great Kourend there are five cities, one of which resides in a volcanic area exclusively inhabited by dwarves called Lovakengj. The city focuses on Mining and Smithing as crafts and is responsible for providing military equipment for the Shayzien forces, this city is led by Lady Vulcana Lovakengj of the Lovakengj House. Now, if you may ask - what’s special about this city is that its main export are ores which are found by blasting rocks with dynamite in the Blast Mine (Minigame). In addition, a unique metal found only within Lovakengj called lovakite, is mined to make Shayzien supply armour which is said to be useful in encounters with lizardman. 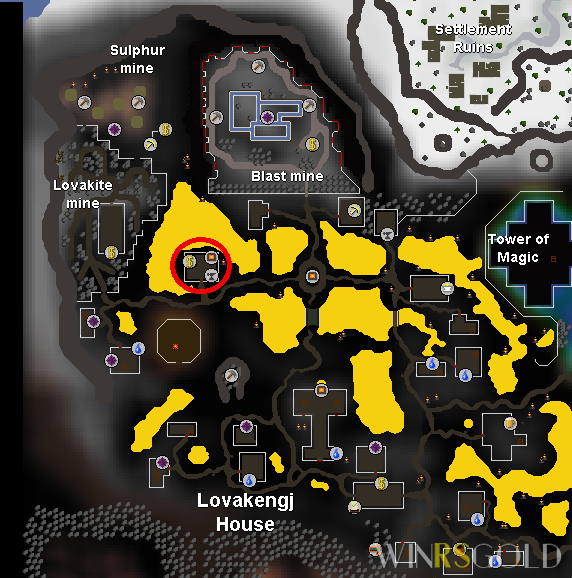 Entering the city of Lovakengj has many benefits but to access them you’ll need a certain percentage of favour. Unlike the other houses, Lovakengj house favour is the slowest to gain but it can be sped up if you have a decent smithing level.

There are 4 transportation ways to get to the city of Lovakengj,

Why get the favour? Some of the rewards for getting to a 100% favour are quite benefiting for training your account.

· At 65% favour, players are able to access the Lovakengj Minecart Network which provides fast transportation to 6 areas.

· At 100% favour, players are able to blast rocks in the Blast mine. Players require a chisel, tinderbox, and dynamite in order to blast hard rocks in the mine. The blast mine offers moderate Mining experience per hour and decent money per hour, depending on the player's Mining level.

There are quite a few ways to gain favours,

Firstly, mining Volcanic Sulphur, and each one you mine has a 1 in 3 chance of giving you 0.1% favour. Along with sulphur and other materials like juniper charcoal, saltpetre, and a pot, then adding a ball of wool to the resulting dynamite pot, the entire process with provide you with 0.1% favour per completed dynamite. At 30%, the fastest way of getting Lovakengj favour would be making Shayzien armour sets from tier1 that provides 1.5% favour per set to tier5 providing 7.5%.

The other two ways to gain favour would be once you’ve reached at 65%, where you can hand out Minecraft scroll to each Minecart areas providing you with 5% favour each. You can also get yourself 5-10% Lovakengj favour by completing quests like The Forsaken Tower.

Now, let’s get to know a little about the mine which requires 100% favour to participate.The Blast Mine is located in the northern section of Lovakengj. Blast mining is a minigame, which grants Mining and Firemaking experience, which requires 43 Mining. The most important item to carry inside would be a chisel, a tinderbox and dynamites, to blast off chunks of valuable ores from within the hard rocks. It is recommended to move at least 3 square blocks away once the dynamite has been placed and lit or else it will result in a damage of 15 hitpoints. Once the dynamite explodes, you can collect the blasted ores from the ground and add them into the ore sack near a working operator. After the sack fills up, you can talk to the brown – haired operator to get your mined ores in noted form along with the mining experience. The ores received will be at a certain probability from Coal to Runite and will give you around 53,000 experience and 542,000 OSRS Gp per hour depending on your mining level. Every dynamite that is ignited gives a firemaking experience of 50 and 20 mining experience for excavating the hard rocks. The other benefit here is that it is unique in the fact that players can obtain ores that are ten levels above their Mining level. This means a player with 75 Mining can obtain runite ores from the blasted ore.

A personal suggestion to every OSRS gold player out there would be to go through the hardship in obtaining 100% Lovakengj House favour if you have not, and get not only easy experience but also a good amount of money. So, Goodluck!