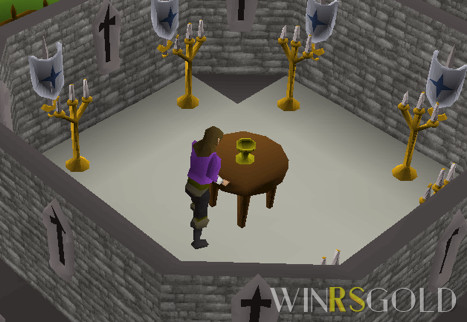 Looking to complete the Holy Grail quest in OSRS gold?  Look no further for a concise guide to aid your journey in completing this quest!

This quest can be difficult to tackle, but we’re here to explain everything in a simple, digestible manner. By following this quest guide, you can enjoy the lore more than gameplay gimmicks, or simply complete the quest quickly in order to progress your main goals.

This quest is rated as having an official difficulty of intermediate, and an official length of medium. However, by following our guide, you can expect to reduce the ratings of both of those factors. Without further ado, let’s get right into the requirements.

One thing to highlight is that if you’re an Ultimate Ironman, you will visit the island of Entrana. The importance here is that Entrana doesn’t allow any combat items, or you can’t enter. The island excludes all forms of combat gear: weapons and armour, with the exception of runes. As such, this is a quest you should prioritise as an Ultimate Ironman, to do before others, or consider item retrieval storage services. It’s a worthy note even if you’re not currently playing one of these characters, as you may decide to do so in the future. Proper planning guarantees near-perfect performance.

You must have completed Merlin’s Crystal, a short quest. There are no other requirements or prerequisites in terms of quests. From Merlin’s Crystal, you need to have the Excalibur with you. You will need level 20 Attack to complete the quest.

Whilst you will face a level 120 enemy, it’s not very notable if you have done practically any training in Magic or Ranged. The reason being is that you can safespot this enemy very easily. If you haven’t trained either of those skills, for Melee builds, you can use any Halberd instead. Or gain some simple levels, the choice is entirely yours. Given you’ve completed Merlin’s Crystal, you probably won’t have anything to worry about in terms of combat, given you’ve defeated a level 39 enemy already. The only thing you need the Excalibur for is to deliver the final blow.

· If you are below 55 combat, bring armour, weapon, and food as an emergency.

· Excalibur is required, without it, you will waste time fighting the boss.

· Preferably some form of safespotting equipment: any Ranged weapon, any Magic spells, or a Halberd for melee users.

· 3 Camelot teleports, 1 Falador teleport, 1 Ardougne teleport. If you haven’t completed Plague City, you can use a Castle Wars teleport or any alternative to get to Ardougne.

· 60 coins on you, for chartering ships.

· If you’re below 45 combat, bring an anti-poison potion. This is because enemies will be aggressive towards you who can inflict poison.

· Combat bracelet and Amulet of Glory for teleportation.

That’s all you need to complete the quest. As always, if you’re a higher level, consider wearing Graceful. Stamina potions are always nice-to-have in any spare inventory slots you may have. 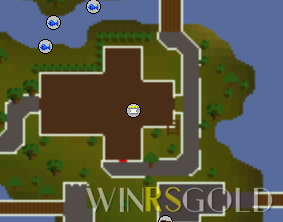 To start with, don’t bring any weapons/armour with you. You’re going to travel to Entrana very early on. Use one of your Camelot’s teleports to get to the quest’s surrounding location off the bat.

Now you have to travel to Entrana, which can be done from Port Sarim. This is where you should use your Amulet of Glory to Draynor Village bank. Speak to the High Priest, selecting the third dialogue option. He will inform you that what you’re seeking is no longer on the island.

Now, you must head to Galahad’s house, which is located here: 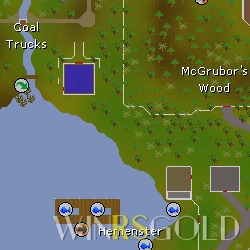 It’s west of McGrubor’s Wood. To get there quickly, use the combat bracelet teleport to the ranging guild, or fairy-ring ALS. Talk to Galahad, select dialogue option four. You’ll obtain the holy table napkin. One bonus tip: if you speak to Galahad again, and select the third dialogue option, you complete the easy diary task of having a cup of tea!

At this point, you can gear up with your weapons, food, and armour. Head to Draynor Manor and go to the top room. The room all the way to the south will have two magic whistles. Providing you have the holy table napkin; you’ll be able to collect the whistles. If you’re struggling at this point, it’s likely because you accidentally banked the napkin or skipped getting it in the first place.

Now head to Brimhaven, by chartering a ship from east Ardougne. If you need to use your anti-poison, do it once in Brimhaven. Head to the following location and blow your magic whistle:

On the bridge, you’ll see the Black Knight Titan. It’s now time to fight it, safespotting this boss really is a piece of cake compared to any other. Safespotting it as simple as taking a step back from it, and not being directly in front of the boss, basically not standing on the bridge. The only thing you must remember is, as aforementioned, using the Excalibur is crucial for the final hit. Without this, you will not be able to kill the boss, and it will regenerate fully. 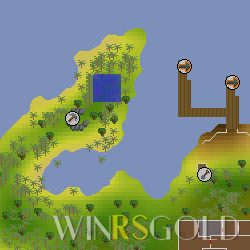 Proceed to head south, following the river, and you’ll see a fisherman who will explain some lore. After all, it is technically called the ‘Fisher Realm’. Select the second dialogue option. Walk towards the castle, you’ll see a grail bell on the floor. Pick it up and ring it, directly at the structure of the castle. Head south, go up the stairs, and select the second dialogue option followed by the first.

Keep one slot empty in your inventory, use a Camelot teleport. Converse with King Arthur, who will then redirect you to Goblin Village. Use your Falador teleport and head north to the village, and you’ll see Sir Percival. Inform him of his obligations by selecting the second dialogue option, and head back to the Fisher Realm, the same way you got there in the first place. Note, that after having killed the titan once, you no longer need to fight anything in this quest and buy RS gold. If you're at a low combat level, watch out for the poisonous spiders that roam around still.

Go back into the castle, head to the eastern tower, and climb to the top. Take the holy grail and speak to King Arthur in Camelot for the final time. Congratulations, you’ve now completed the quest!

Well done for completing the quest! Whilst it involved a lot of travelling, you managed to do perfectly well and defeat a level 120 boss. Your efforts have been rewarded through receiving 2 quest points, 11,000 Prayer experience, 15,3000 Defence experience, and the ability to start King’s Ransom.  What’s even more impressive is that you now have the game-changing ability to put a portrait of King Arthur in your player-owned house!