One of the most intriguing bosses in OSRS gold is Venenatis. Rewarding 400 Slayer experience (if you have the task), this particular boss is located in the wilderness. Nonetheless, the boss remains perfectly accessible to those newer to the bossing aspect of the game. This guide intends to walk you through the boss in an efficient manner in order for you to get optimal kills.

Venenatis can also be killed with your friends, as her spawn/path is in both single and multi-combat regions. Whilst that may make things easier and faster, the tradeoff is you’ll have to split the loot! Due to this, whether you decide to go with your friends or want to solo this boss, there’s little difference in the approach you should take. Bear in mind, you will not at any point surpass level 30 wilderness. As a quick reminder, below level 30 wilderness, teleportation methods (such as the classic Amulet of Glory) are fully effective and functional.

Fortunately, there’s no need to worry about having completed a multitude of quests, nor a ton of diaries. There are two approaches that you can take: melee and ranged. Regardless of your chosen approach, you’ll want to have at least 70 Hitpoints, and at least 70 Defence. Having high-magic, 90+ can be extremely helpful. This is because unlike other skills, your Magic defence is determined by your Magic level in conjunction with the gear you’re wearing. 70 Hitpoints and 70 Defence are merely the minimum recommendations, having 80+ in both is recommended. A bare minimum of level 37 Prayer is needed to protect against magic attacks. Level 25 Prayer also allows you to protect an additional item in case of an abrupt death/attack. You really want at least level 43 Prayer, however, to defend against player-attackers. 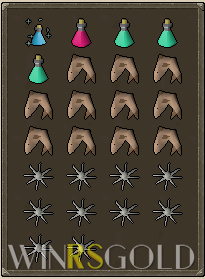 With the melee approach, ensure you have at least 75 Attack and 80 strength. For your helm: wear Verac’s. An amulet of glory is perfectly fine, combined with an Ardougne cloak if you have one.  Verac’s brassard & Verac’s plateskirt are also recommended, alongside the best gloves you have (such as Barrow gloves or Rune gloves). Dragon or Rune boots are acceptable. This setup does carry some risk, but the boss cannot be easily defeated with weak gear. As you are below level 30 Wilderness, you should be able to escape any player-killers as long as you are proactive.

Verac’s gear is important as this boss has significant defence stats and bonuses. Without it, your kills will be far too slow.

For the ranged approach, an Archer helm, glory, Black d’hide with Ava’s accumulator is perfectly fine. For your main weapon, use either Craw’s bow or a Dragon crossbow. For ammunition, consider enchanted diamond bolts or ruby bolts. Barrow gloves with snakeskin boots and a book of law in your shield slot is recommended. You can choose to substitute a crossbow with a toxic blowpipe, at which point you should also switch to adamant darts.  The minimum recommended Ranged level would be 75.

There’s an element of risk involved no matter what you do. As such, always ensure you have an emergency teleport available. Whether it’s a glory or a tablet, or a 1-click teleport solution such as an Ectophial - anything works.

Sharks are high-healing food, but are fantastic when paired with karambwans. This is because they can be combo-consumed, meaning after eating a shark, you can instantly consume the karambwan. For other foods, you’ll face a delay.

Having a few prayer potions can be helpful, as Venenatis can drain your prayer. Similarly, the boss can poison you: hence the super anti-poison that is shown in the screenshot.  Finally, you can either bring a super combat potion or a divine ranging potion to speed up your kills.

The first thing to remember is this boss is practically immune to all Magic. Don’t bother casting any spells: it’s not worth it. Secondly, do not engage with player killers, even if you think you are adequately equipped. You will be equipped for bossing, whilst they’ll be equipped for hunting players like you. It’s always better to leave rather than risk losing any expensive gear, you’ll make more long-term by playing it cautiously. Try to select a medium populated world to avoid player killers.

The boss will use a variety of attacks against you. For example, she may lunge at you, delivering a maximum hit of 50. Her magic attacks have an area-range based damage, inflicting everyone with a certain amount of damage who’s in range. Additionally, she can also cast a web and throw it at you: hitting you for up to 50. To make matters worse, you can then receive consecutive melee or magic attacks as a follow-up, immediately.

The importance of using Protect from Magic cannot be stressed enough. As long as you use it, you avoid the magic attack at all-times, and if you receive the web attack: there’s no consecutive follow-up that occurs immediately.

The only Magic spell you should ever consider using is Vengeance. This spell will bounce back 75% of the damage you receive. If you ever receive a high-hit web/melee attack, casting it can really do significant damage to the boss.

To speed up kills, using Rigour or Piety (depending on your chosen approach) can aid you.

Mechanically, this boss cannot surprise you beyond anything you’ve read above. There are no other special attacks she can pull on you.

To avoid player-killers, you will need to lure the boss into a single-combat area. The boss is naturally located within multi-combat areas. The importance of the single-combat area is that you cannot be rushed by multiple other players in a single-combat area. This allows you to escape with relative ease from any external attackers. If you get tele-blocked, you can attempt to run all the way out of the wilderness, or even to Green Dragons. Especially if you’re dealing with a pure, the PKer will stand a high chance of being attacked by a random Green Dragon.

The yellow line marks the difference between single and multi-combat. You can also stand behind the tree all the way to the left if you want to safe spot the boss. This can be used in conjunction with a Dwarven Multicannon.

This boss is particularly renowned for being the only boss that drops the Treasonous ring. If you intend to farm the boss for profits: the recommended method of killing to maximise kills versus risk is ranging. With that said, the dynamic isn’t set-in-stone, many people enjoy bossing with their friends. You can expect to easily make upwards of 1 million GP per hour, whilst also gaining considerable experience in combat.

Hopefully, this guide was useful for you! This boss can be daunting at first, but once you’re comfortable with the mechanics, Venenatis is a fun boss. She also serves as a great Slayer task.